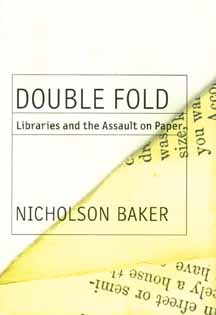 Double Fold: Libraries and the Assault on Paper by Nicholson Baker. Published by Random House, 2001. 270 pages.

Having already taken librarians to task in the pages of the New Yorker for replacing their card catalogs with computers and for excessive weeding, the author now looks rather critically at the development of microfilming by libraries to replace book and newspaper collections.

He looks at the motivations for microfilming-both the saving of space and preserving the content of embrittled pages. He considers the history and many drawbacks of microfilming. He looks at quite a few of the leading figures in the library world that played a role in the microfilming explosion. He also looks at the ill-fated mass deacidification project at the Library of Congress and notes that many of the same forces involved in microfilming are currently at work pushing the digitalization of our nation’s libraries.

Although this is particularly of interest to big university and public libraries, I think it would be good for all librarians to be aware of the issues that Mr. Baker raises about the role of libraries in our society.