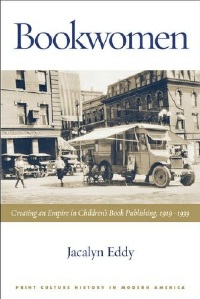 The story of a number of influential pioneering women who helped initiate the first golden age of children’s books early in the 20th century. Anne Carroll Moore and Alice Mabel Jordan, librarians; Bertha Everett Mahony, a bookseller and reviewer; and Louise Seaman and May Massee, publishers.

In a complicated mixture of competition, cooperation and mutual influence, these women took children’s books from the neglected stepchild of adult books to a vibrant important part of American life. Most of the progress happened in the decade of the 1920s because the Great Depression and World War II made it difficult for any part of the publishing business to develop. The development of children’s books is so often told in terms of the authors and books themselves, it is interesting to hear what was going on behind the scenes among librarians, publishers, booksellers and the media.