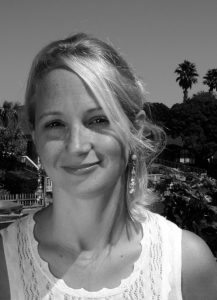 From the triumphs of Babymouse to the travails of Boston Jane, from the mysteries of The Creek to the antics of Our Only May Amelia, Jennifer Holm joins the select ranks of authors whose books can be found in multiple sections of the library. Equally at home with comic books and Caddie Woodlawn, you might think Jennifer Holm was predestined to become a prolific and beloved author of children’s books.

But you would be wrong. Jennifer Holm’s circuitous route to library ubiquity began with a goal to be a diplomat or work in a think tank but somehow ended up in television and animation. Holm was a successful television producer for ten years, using her diplomacy skills and maternal instincts to nurture the people around her when she realized that her inner artist was being starved.

Fast forward and Jennifer sat at her father’s bedside, and listened to his stories of growing up in Depression-era Washington state. She talked to him about his childhood and about the diary he had found when cleaning his mother’s attic after her passing. Great Aunt Alice’s diary was the spark that lit Our Only May Amelia. “It was only twelve pages but I loved it,” recalls Holm. She found the voice she had been looking for and melded Alice’s experience with her own-“I tacked on some of my brothers” and explored the dynamics of being the only girl in a family of boys.

Family relationships are a frequent theme for the familial-minded Holm. The casual observer can figure this out by looking at the spines of her books. Her husband works with her on the stories of the spy-cat stories in The Stink Files. Babymouse is illustrated by her brother, Matt. Growing up, she recalls reading Prince Valiant and having no use for the girl super heroes. “I just hated it – the gold bodice, the red go-go boots – it was a female version of what a man would want.” Matt had been a budding cartoonist and even had an internship with the political cartoonist of The Philadelphia Enquirer. “This was way back before comics for kids had started,” she recalls. Jennifer and Matt worked on a proposal for two years. After several rejections, Jennifer went in person to several publishers and “pitched my vision that a comic book for girls by a publisher would be good.” Holm, with her background in television and her knowledge of the comic book industry, knew that parents wouldn’t go into a comic book store. Random House understood her vision and the rest is history.

You might be surprised to know that for a pink graphic novel, Babymouse has lots of boy fans. “Matt and I had to put aside our prejudices about boys and pink – the boys want to be cartoonists. They bring us their own art to show us. Girls give us emotional feedback on what Babymouse is going through.”

Babymouse is also no stranger to controversy. In Skater Girl, Babymouse decides that she does not want a career as a figure skater, she just wants to skate for fun. Given the long hours and necessary commitment necessary for competitive skating, the decision made sense for Babymouse but some readers had difficulty equating her decision with the “Never quit” mantra drummed into their heads from a young age.

Jennifer Holm’s family is not just behind the pen or the pad – as in Our Only May Amelia, they also provide the inspiration. “If you write a story about your father’s family, you have to write about your mother just to keep the peace,” states the author. Fortunately, there was much fodder on both sides. Holm has always been very close to her mother’s large Italian-American family. As she reminisced with her mother one day, Holm realized that a whole way of life was disappearing. “I wanted to remember it–that’s why I wrote Penny from Heaven.” Holm interviewed family members for research as well as professors of Italian-American culture. She even went to the National Archives so she could learn more about the internment of Italian Americans during World War II. “I got to hold the actual documents, the author enthused. “It was stunning.”

While she loved the big family aspect of the book, the relationship between Penny and Frankie is one “kids really respond to. He could go either way. Most kids have someone like that in their lives.”

Holm’s taste for research was indulged as she created the Boston Jane series as well. “When you come into a library as an author, they really want to help you,” notes Holm. A helpful librarian encouraged her to read a book about James Swann, a larger than life figure on the northwest coast. She found the book and learned a great deal about 1850s coastal Washington. “I read a lot of diaries by wagon train women who started off as traditional ladies – struggling to preserve that aspect of their life, taking the good china out every evening – but eventually having to give up not only their creature comforts but having to watch their children and even husbands die on the trail.” She adds that these women “became quite feminist when they hit the west.”

Boston Jane has its roots in Holm’s family as well. James Swann’s account of oystering reminded her of her own grandfather’s experiences as an oysterman and contributed to her wanting to capture the experience of what it was like to live in that place at that time – to establish a connection between today and 1850s Washington.

In spite of the variety of settings and even the different audiences for each book or series of books, one theme runs constantly through all of Holm’s works: family matters whether it provides the source material, the inspiration, or the pen.