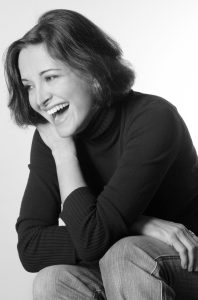 When you hear the name Carmen Agra Deedy, you most likely visualize the vivacious storyteller, perhaps bewitching you with her tale of Martina, the Beautiful Cockroach. Or maybe you think of Carmen Deedy as the creator of that mainstay of library talks, The Library Dragon. Perhaps your thoughts turn to the lyrical beauty of Kimeli’s story of 14 Cows for America and how she conveyed the young man from Kenya’s heartfelt response to the tragedy of 9/11.

14 Cows for America has won numerous awards but perhaps the most precious recognition is revealed in the letters from children. As we approach the tenth anniversary of 9/11, the story’s relevance has not dimmed: We can still learn from the true tale of how a visiting student responded to the devastation with an act of sacrificial love. When initial media attention focused on him, Kimeli had many offers from interested publishers and authors. It was Carmen Deedy whom he trusted to tell his story the way he wanted it to be told, who understood his heart.

The Cheshire Cheese Cat is Carmen Deedy’s first novel. With delicate illustrations from the inimitable Barry Moser and co-written with Randall Wright, this tale of a non-traditional cat, a mouse with a mission, and a castle raven brings Dickensian London to life. In fact, it even brings Dickens to life.

The journey began in the year 2002, on a typically foggy London night –“the sort of night you expect to discover something,” recalls Carmen–and one of her daughters called to her out of the mist to hurry.

“It was a little side street–an alley, really–and the sign was creaking. It was so perfect. The sign said ‘The Old Cheshire Cheese, rebuilt 1667.” Carmen Deedy knows her British history and immediately surmised that the Great Fire had consumed the first Cheshire Cheese. She learned that the inn had been a magnet for the literary set over the centuries including Samuel Johnson, Mark Twain, and William Thackeray. Dickens himself mentions it in David Copperfield. Perhaps he was sitting in the Old Cheshire Cheese when he wrote those lines since it was well established that he wrote there. Carmen Deedy looked at the “mysterious and wonderful” rooms and knew instinctively that “skullduggery had to have taken place there.”

As they turned to leave, Carmen’s daughter Lauren exclaimed over a curious picture: “It was an etching on vellum of cats with tonsures and cowls like monks.” The storyteller wondered “What if one of these cats had a terrible secret?” She wrote 20-30 pages on the plane home, establishing the arc of the story. Carmen researched the cheese–it was a favorite of her family–and created a timeline of who was alive in 1859 and what Dickens would have been writing. She learned that the great author was struggling with the opening to one of his most celebrated novels, A Tale of Two Cities.

The possibilities were absolutely delicious. Yet, The Cheshire Cheese Cat was shelved as other projects claimed her time. Then, Carmen met author Randall Wright at a conference. The two discussed the Dickens project and a partnership was born. “I’m so used to having that binding limitation on text for picture books,” she explains. Randall encouraged Carmen to “think of the largesse of words a novel offers you–if you have more to say, say it!” Though neither one had ever collaborated to write a book before, they decided to create The Cheshire Cheese Cat together.

Wright flew to Atlanta for a weekend carrying the first chapter and “we figured we would know if it would work or not.” They went back and forth and reworked that first chapter more than a dozen times. After that, each would write a chapter and hand it off to the other. Carmen vividly remembers reading one chapter that ended with “What will we do with Maldwyn?” Who’s Maldwyn? It was up to her to figure that out.

Maldwyn became a raven. “There’s a mythic quality about ravens, something primal that both repels and attracts,” muses Carmen. As the two writers progressed, “it became clear that it was not going to be an adult work.” They took out more than 400 harder words and ensured the remaining ones provided contextual clues for the readers. But they needed something more.

They needed Barry Moser. “When I first went to Peachtree in 1989, we picked up a book by Truman Capote called I Remember Grandfather with watercolors by Barry Moser. I remember saying if I could ever have something illustrated by Barry Moser, I could die happy.”

Now, 22 years later, Carmen Deedy’s wish has been granted. Barry Moser has brought Pip, Skilley, Maldwyn, and other creations from her novel with Randall Wright to life. Never one to rest on past achievements, the indefatigable storyteller has several more projects in hand including a sequel to the beloved Library Dragon and a war-time novel with an ingenious premise. So, yes, Carmen could die happy now that her Barry Moser dream has been realized, but she won’t just yet. Carmen Deedy has many more stories to tell.