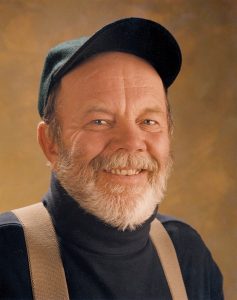 When you hear the name “Gary Paulsen,” the most immediate thoughts that come to mind are stories of the outdoors–the Canadian back country of Hatchet, the Alaskan vastness of the Iditarod and the like. With his newest book, Gary Paulsen is venturing into a new wilderness–love.

We first met Kevin Spencer in Liar, Liar and then again in Flat Broke and Tina Zabinski has been his aspirational love throughout. “I’d had it in my head that he’d never catch her–I thought it would be funny if he just loved her from afar in all the books,” muses Gary. However, Gary’s editor, her assistant and his agent lobbied for a happy romantic ending for “poor Kev. Given that everything else always goes so wrong for him, that seemed fair enough,” concludes the author. Will a happy ending be the finale for Kevin? Paulsen confides that in the next book, “He’s going to run for office,” ensuring continued drama.

Given Paulsen’s prolific output, that next Kevin book could come out in a few months. He is in a class by himself when it comes to uniting both quality and quantity. How does he maintain the flow? “I write all the time. Wherever I am,” confides Paulsen. Desktop computer, laptop, paper pads all are the conduits for his creativity. What is the biggest challenge? “I’m usually writing several books at one time this way so putting them all together gets tricky.”

Even though he has written more than 200 books, there’s a big Hatchet in the room that begs the question of how the book came to be written and how it changed the author’s life. “Hatchet is a wonderful mystery to me,” reflects Gary. “I liked writing Hatchet because it felt real to me, everything that happened to Brian, in some form or another, had happened to me and I think that made Brian’s experience seem as if the readers were alongside him as they were reading.”

Those same readers challenged the author to revisit Brian’s adventure in more adverse circumstances– The River, Brian’s Winter, Brian’s Return and Brian’s Hunt have followed. “The readers dared me to write it (‘oh sure, Brian toughed it out in the summertime; you got him out of there before winter came and things really got tough’).” Paulsen feels strongly that “sequels should be as good if not better than the original; I’m not sure if I achieved that, but I tried, I had a good time writing the four sequels, and I think the readers like Brian’s whole story–at least I hope they do.”

While it’s not the same kind of challenge as writing sequels to one of the most beloved books of the century, Paulsen took on the supreme test by participating in the Iditarod Trail Dog Sled Race in 1985. The race took 17 days. Though he was unable to compete again in the Iditarod due to health concerns, he has shown his affection, admiration, and appreciation for dogs through his writing, most recently with the three novellas included in Paintings From the Cave and the middle grade book, Notes from the Dog. Paulsen was motivated to participate in the Iditarod because it is “the maximum expression of the bond between dog and human.” Other than a Gary Paulsen novel, of course.

The power of the written word burst upon Gary Paulsen at a young age when a librarian gave him a book to read and his own library card. He can’t recall the book now. “Of course, I was such a terrible reader and it took me so long to read each page that I probably couldn’t remember the title while I was reading the book,” he laughs. “It took awhile for me to fall in love with reading the way I am now.” Gary adds, “Now I read history and nonfiction and anything I can find in the marina office when I come off the boat for a cup of coffee and a donut.”