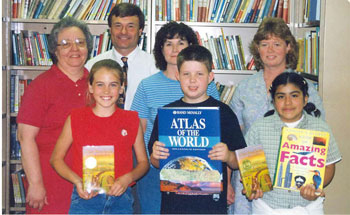 One of the most exciting, noisy events in the elementary school libraries of School District 117 in Jacksonville, Illinois is the annual Library Treasure Hunt.

The Treasure Hunt can be traced back to the contributions Bound to Stay Bound Books made to our hometown school libraries to update their collections and facilities during the 1990s. In discussions with Mary Frances Tunison, the District Library Coordinator, the Library Treasure Hunt idea came up as a way to celebrate the improved libraries and to help the students get the most out of them.

In the fall of 2000 people from both BTSB and the District searched through the libraries and came up with about 200 research questions. We made sure they came from all areas of the collection-fiction, non-fiction and reference. We tried to cover all subject areas-history, geography, literature, etc. Lastly, we tried to make sure that all types of media would have to be used-books, CD-ROM, magazines, newspapers and the Internet.

As the first Treasure Hunt approached in February 2001, we involved the teachers and librarians at the eight elementary schools in the District. The Treasure Hunt was designed to take place in fourth grade. The teachers and librarians went through the questions to make sure they were appropriate. Then the teachers split their fourth grade classes up into roughly equal teams of four or five students. The students had a lot of fun coming up with unique team names, such as the Brainyacts and the Rambunctious Readers.

Finally the first Treasure Hunt arrived! For four straight weeks during their weekly library period, each team was given a list of 30 questions to answer. Teamwork was essential as team members split up the questions and raced around the library looking for answers. Not only did they have to give the right answer, they had to write down where they found it.

The answers came in to Bound to Stay Bound, where Jan Smith graded the results in terms of correct answers and correct sources. The scores were reported back to the schools and they were posted on scoreboards in their libraries.

After an exciting month of Hunts there was a District winning team, a winning team at each school and a winning team in each classroom. In April Bob Sibert, the President of BTSB, visited each school to award T-shirts, books, and other prizes to the winners. Everyone who participated got some kind of award.

The Treasure Hunt has taken place annually since its start in 2001. If you think you would like to try a Treasure Hunt at your library, see the attached documents containing the rules, the schedule, the forms and the questions that we use.