Decades ago, while working as a quality control manager in a large U.S. book manufacturing facility, we produced over 75,000 children’s books every day for just a single New York publisher. “Cat-in-the-Hat,” “Kermit the Hermit” and “Bambi” are just three out of many titles. The quality was acceptable, the folds were Singer sewn, the spines received a paper tape and the covers were made out of an abrasion-resistant, printed paper. Price was the name of the game and the book manufacturer hardly made any money, but it was consistent work.

Recently, a member of the Book Manufacturers’ Institute told me, “These days, virtually all children’s books are now manufactured abroad,” in Asia to be more specific. I certainly agree with this assessment, at least for trade picture books, as evidenced by what I’ve seen consulting in China and other parts of the world. 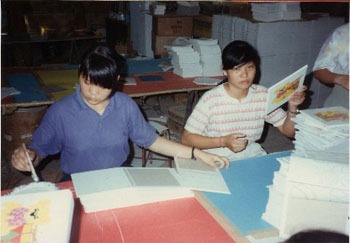 Yes, price is still the name of the game but something has to suffer and that is often quality. As the former head of a university book-testing laboratory, and as an accepted expert on bookbinding, books are still being sent to my home for analysis and testing for a modest charge. Recently, some children’s books were sent to our lab because of complaints about cover warping. They were produced in a Far Eastern country that fiercely competes with China. The cover boards were made of corrugated packaging board, instead of laminated binders board, and the cover material used for making the hard cover case was a thin, printed paper, instead of library buckram. I’m sure these poor books were also affected by three weeks on a boat in the salty sea air on their way to America. In this instance, the same drive to get a lower price that led the publisher to outsource books abroad caused them to accept lower quality and local materials like board, paper and glue.

In the many plants this writer has visited all over the world, the manufacturing processes vary. Some use sophisticated, automated book-manufacturing machinery. In others, I have seen hundreds of people making cases by hand, manually brushing adhesive onto the end sheets. How many times does such a binding circulate– 4 or 5 –times? Sometimes, several thousand miles away in New York City, the publishers don’t know exactly what they’re getting until the books arrive in their offices. This is why the durability and consistency of pre-bound children’s books are more important than ever. BTSB children’s books are bound in accordance with the tough specifications established by ANSI/NISO/LBI, organizations you can trust.