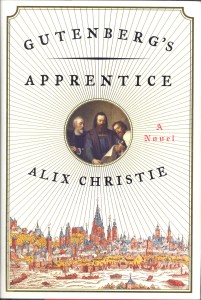 Gutenberg’s Apprentice, by Alix Christie. Published by HarperCollins in 2014. 401 pp.

In Mainz, Germany in the 1450s a talented young scribe is apprenticed to the mysterious and demanding Johann Gutenberg. It turns out Gutenberg is just about to start the ambitious project of producing a quantity of Bibles on his newly-invented, top-secret printing press.

Through the eyes of the young apprentice we see that the printed book, which we take for granted now, excites incredible passions in the 1400s – it’s a religious abomination, it’s revolutionary, it’s a goldmine. This first printing job has to navigate through the powerful labor guilds, the even more powerful Church, and the ever-present specters of disease and war in medieval Europe.

As the project progresses you can see many of the issues that will bedevil printers for centuries, the first little glimmers of the assembly line and mass production that will revolutionize the world someday, and even draw parallels to the social effects of the disruptive technologies of the last century, such as the car, the television, the computer and the cell phone.

To those of us who love books, this is a great historical novel that takes us back to the very beginning of the making of the modern book and allows us to see it with totally fresh eyes.