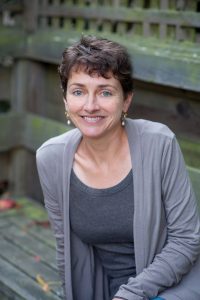 “Everyone in my family read,” remembers Annie Barrows. “There was nothing else to do at night.” One can imagine the little Annie watching the grownups read to themselves until someone—usually her mother or her sister—would read aloud to her.

Some of those books were inevitably the Betsy Tacy stories which Annie credits as a big inspiration for her popular Ivy and Bean books. Harriet the Spy and the works of Edward Eager were also favorites and a close reader can see their influence. “The library was home to me all of my life,” she confides. Her sister took her to the library once a week and she vividly recalls standing at the picture book table and thinking that she needed special permission to go to the fiction section.

“There was the day when I decided to make a break for it—I looked both ways and ran into junior fiction!” Annie grabbed a book, hastily shoved it between some picture books and discovered a whole new world. “It was the most glorious feeling,” she exults. “I could find out anything.”

Annie Barrows is now accomplished at moving between worlds. She is as celebrated for her adult fiction as for her delightful chapter books. One has to wonder how many families have had simultaneous Annie Barrows moments with a parent reveling in The Guernsey Literary and Potato Peel Pie Society while the kids are deep in The Magic in the Mix and Ivy + Bean. Astonishingly, Guernsey has been published in 37 countries to date. This World War II epistolary novel co-written with her aunt Mary Ann Shaffer, has become a staple of book clubs.

In spite of the partnership with her aunt and the success of Guernsey, Annie usually writes by herself and finds a balance by switching off week by week or month by month “until I reach a point where I can’t carry on.” She concludes “It’s wonderful to have these two different places to move between.”

She also literally moves between places now that there is an International Ivy and Bean Day. “I started realizing how many countries had the books when I got to number eight,” she recalls. She gets letters from children all over the world, from as far away as Australia and Singapore. “Chronicle has done a great job in getting books to these markets. The author visits a select number of bookstores for the U.S. Ivy and Bean Day.

Annie’s relationship with Chronicle goes all the way back to when the just-graduated Annie (with a degree in Medieval History, no less) was hired as an editorial assistant. She worked her way up—assistant editor, editor, Managing Editor, Editor, and then Senior Editor—and spotted the manuscript that became Chronicle’s first New York Times’ bestseller. She earned an MFA in Creative Writing in 1996 and her writing career flourished, hitting a new level with the launch of Ivy + Bean in 2006.

Nowadays, the general theme of her correspondence is “get off the stick and write number eleven already!” she laughs, quoting a letter she had received only the day before. She also gets letters from kids who describe the tricks they play on their brothers and sisters inspired by Ivy and Bean. “Then I get worried,” she notes.

She also gets letters “from kids who have written a book and want me to publish it” as well as “lots of illustrations to go with the stories already published,” Annie adds. The creativity has extended even further—Annie recalls one girl who was taking woodworking who made it her project to create a wooden victory cup for Ivy and Bean.

When it comes right down to it, “The Ivy and Bean books work for kids not just because they are cute and funny, but also because their perception of the world is correct, and they don’t need a grownup to tell them, or fix them, or teach them a lesson,” says Annie. “That is the reason it works–it reinforces that kids have agency and they don’t need to be improved.”

And that’s why, in spite of the many offers to help her write it from her correspondents, her legions of fans are willing to wait for the next one, whether they are 8 or 78 or anywhere in between.