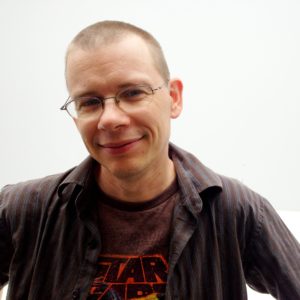 Tom Angleberger — Take Me to Your Readers

It seems that robots are everywhere on the fictional landscape these days so why shouldn’t a robot be in school? In Fuzzy, beloved Origami Yoda creator Tom Angleberger teams up with his buddy Paul Dellinger—who just happens to be a best-selling science fiction writer—to tell the story of Vanguard Middle School which happens to be run by a super-computer named Vice Principal Barbara, an experimental robot named Fuzzy and a young robotics whiz named Max, who is selected to show Fuzzy the ropes.

Tom and Paul worked together at a newspaper many years ago where they once did a comic adaptation. When Paul retired, Tom suggested they work on something together. “I love sci-fi but was not comfortable plunging into it,” he confides. “Our first idea for a story was that someday there will be a robot who goes to school and how will people react?”

Tom’s varied job history includes a stint in a lawn mower factory and even then he remembers, “off in a corner, they were building a machine to replace us.” Perhaps that memory fueled the co-authors’ query of where else could robots go? The successful children’s book author had the perfect place. Tom adds that “Paul would never have thought of writing about middle school and I would never have written a story about a robot.”

Fans of Origami Yoda and Tom’s other books may be surprised that while there is a lot of humor, it’s not, as the author says, “a yukkity yuk” book. At the same time, “it’s not a science fictiony world.” Tom and Paul worked on the book and somewhere around Year Seven, Tom realized how much Fuzzy and young people have in common: “They feel like everything is programmed and they are pushed around and there are all these expectations and they are trying to figure out what is really you and what is not.” He goes on to say that “if the book had been published in the first year, it would not have been nearly as good.” When they came up with the idea that someone would want to steal this multi-million-dollar robot, they had the beginnings of their plot.

Collaboration is not new for Tom Angleberger and the popular Inspector Flytrap series with Cece Bell represents a marriage that is successful on the page and off. “I was just amazed at Cece’s art—it’s easy to write something like ‘Emu chases Flytrap on a skateboard’ and she just nails the illustration for it. She had the crazy idea to do the mini-comics and those are absolutely bonkers and I love them.”

Tom also loves Star Wars. He saw the first film at the age of six and devoured the action figures. At the same time, he also loved doing origami and never thought to put them together—“except maybe an X-wing,” he adds—until he saw origami yoda on the internet. He made a simple one himself, showed Cece and one idea led to another. “Before I knew it, I got hooked up to an editor and we had a giant six-book story to tell,” remembers Tom. With a disarming laugh, he adds, “The force was with me.”