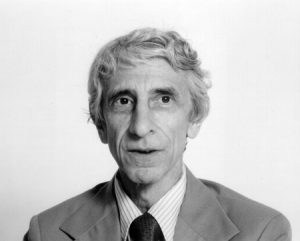 “I never became a world traveler,an explorer, an adventurer. But I did become a writer, which is pretty much the same.”

Few writers have won as many literary honors and inspired as much affection and interest among readers, young and old, as Lloyd Alexander. At one point, however, it seemed unlikely that he would ever be a writer at all.

“My parents were horrified when I told them I wanted to be an author,” Alexander recalls. “I was fifteen, in my last year of high school. My family pleaded with me to forget literature and do something sensible, such as find some sort of useful work. I had no idea how to find work, useful or otherwise. In fact, I had no idea how to become an author.”

His parents could not afford to send him to college. And so, when a Philadelphia bank had an opening for a messenger boy, he went to work there. “As a would be writer, I thought it was a catastrophe,” he says. “As a bank employee, I could barely add or subtract, and I had to count on my fingers.”

After saving enough money, Alexander quit work and went to a local college. Dissatisfied with not having learned enough to be a writer, he left at the end of one term. Looking for adventure, he joined the army, which eventually took him to Europe. After World War II ended, he was discharged to attend the University of Paris. While a student, he met and married a Parisian girl named Janine. Alexander began to long for home. “If I was to write anything worthwhile,” he says, “I would have to be closer to my roots.”

The young couple went to Drexel Hill, near Philadelphia, where Alexander wrote novel after novel, which publishers unhesitatingly turned down. To earn a living, he worked as a cartoonist, advertising writer, layout artist, and associate editor of a small magazine. It took seven years of writing before his first novel was published.

During the next ten years, Alexander wrote for adults. He then began to write for young people. It was, the writer says, “the most creative and liberating experience of my life. In books for young people, I was able to express my own deepest feelings far more than I ever could when writing for adults.”

Most of his books for young people have been written in the form of fantasy. But fantasy, Alexander believes, is merely one of the many ways to express attitudes and feelings about real people, real human relationships and problems. “My concern is how we learn to be genuine human beings. I never have found out all I want to know about writing and realize I never will. All that writers can do is keep trying to say what is deepest in their hearts.”