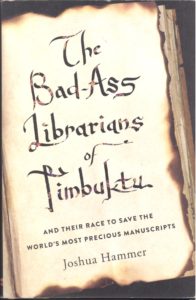 The Bad-Ass Librarians of Timbuktu and Their Race to Save the World’s Most Precious Manuscripts, by Joshua Hammer.  Simon & Schuster, 2016, 278 pp.

Has there ever been a better book title?  Really?  Better yet, this title delivers what it teases.  There are good guys, bad guys, action, adventure, suspense, the ancient and mysterious Timbuktu, and so much more.  Moreover, this is a true story about a man and how he manages to save ancient texts from sure destruction, thus preserving the heritage and knowledge of his forbearers for the world.

The good guy is a gentleman by the name of Abdel Kader Haidara.  Haidara spends much of his early career seeking out and collecting thousands of Arabic texts for a government library in Mali.  He roams the Sahara and the shores of the Niger River searching for ancient tomes that have been handed down generation to generation for hundreds of years.  Timbuktu was a center of learning in the ancient world with many scholars and lots of books being written on both religious and secular topics.  These books were collected by families, and when times came where such knowledge and learning was not looked upon kindly, were hidden away.  Over time, Haidara becomes very successful at getting families to sell the books so that they can be restored and preserved. In the process, he becomes a scholar and librarian in his own right.

The bad guys are a branch of Al Qaeda active in the Maghreb region of Africa including the area around Timbuktu.  Also included with the bad guys are Tuareg rebels who join with Al Qaeda for their own purposes but eventually are double crossed by the leaders of Al Qaeda in the Maghreb.  In addition, the government of Mali and of some western nations, including the United States, are not shown in the best light in regards to their efforts to stem the strength and influence of Al Qaeda in the region.  Many mistakes and missteps are made that might have mitigated or eliminated subsequent events.

Al Qaeda has no tolerance for Islamic teaching that does not mesh with their version of Islam.  Many of the books that Haidara has saved are texts that are considered blasphemous and thus are in danger of being destroyed if found.  When Al Qaeda and their Tuareg allies take over Timbuktu and the surrounding region Haidara and the other librarians act to prevent the destruction of these invaluable treasures.

While Haidara experienced action and adventure tracking down these books from the ancient world, those experiences pale in comparison to the exploits and danger experienced in smuggling these texts out of Timbuktu to the relative safety in the southern, government controlled region of Mali.  At some points the suspense is nearly unbearable when the librarians are going through rebel controlled checkpoints or working in the middle of the night to load up texts from libraries literally under the nose of Al Qaeda.

I enjoyed this book and highly recommend it.  While it is full of the elements found in an action thriller it also is full of the history and culture of Timbuktu from the past thousand years.  Most importantly, it is a lesson in what ordinary people can do when faced with extreme circumstances and how it changes them and the world they live in.