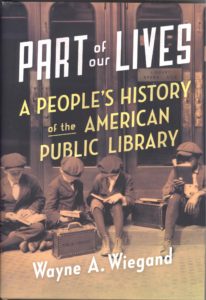 Part of Our Lives: a People’s History of the American Public Library, by Wayne A. Wiegand.  Published by Oxford University Press in 2015.  331 pp.

Wiegand is a retired professor of library science who has specialized in the history of libraries.  This might be his most impressive work yet.  He gives a very detailed history of the public library in America.  But this is not a dry, academic history but one that is told in the voices of patrons and working librarians, and one that considers the burning issues that matter to patrons most.  A recurring issue is whether the library should contain “pop” fiction that patrons want to read or should it contain only the classics that the librarians or city officials feel they should be reading.  This issue of censorship was raised over and over again through the centuries over many different types of materials.

Besides the many issues facing libraries through the years, Wiegand also looks at the changing nature of librarians, changing technology in libraries and the changing roles of libraries in what they carry and how they serve their community as a public space.

There are only a few photos scattered throughout the book and they don’t really add much to the text.  But after reading this book you feel as if you have raced all over the country and traveled through time and now you really understand how precious and valuable our public libraries have been to this experiment called America.