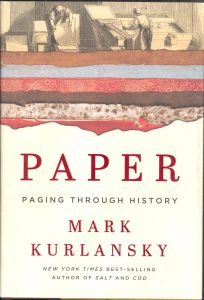 Paper bring us together as humans. It is all around us. We cannot conceive of our lives without paper and the multitude of uses it has at home and across our desks at work. And it will be with us for a long time.  From the napkin that wipes us to the grocery bag you use or the Sunday paper or a piece of art done by a famous artist.

Paper is daunting when you have a blank piece and are trying to write anything. Really, it scared many writers that had to fill those white pages. Around the 1900’s, newspapers printed many times during a day, posters covered exterior walls and pillars, and markets used to wrap almost everything from glass and meat to jewels and fish in paper. Better manufacturing produced paper cheaper and in large quantities to supply the demand. Even though it came at a high cost of human lives, given the precarious conditions workers had at the time.

Kurlansky takes us on a journey that covers all the way from China to Japan across central Asia ending in Andalucía, going hand on hand with the development of the Muslim world. He shows us Roman mills with massive grindstones, formerly used for the production of olive oil, grinding the cellulose exceptionally well to make thin, smooth paper. In Fabriano Italy, molds formed paper with attractive superficial designs and characteristic ­watermarks.

Paper mills were noisy, they handled massive piles of dirty rags, collected by ragpickers, and they stank of ammonia, as well as urine that was being used to soften the rags’ fibers. However, paper was always needed, and mills were a growing industry. Low-priced paper helped with the creation of massive libraries, which supported the academic peak of the Muslim culture and the growth of printing in Asia and Europe.

Improving paper never stopped. The 18th century welcomed the manufacture of woven paper: which artists like for being smoother. In the 19th century, the steam engine turned paper mills into factories. Even in the present, the author shows how paper has multiple uses — artists are working creatively with it as never before — and serves old ones: if print newspapers are less, print books look promising, especially as new technologies produce them faster and more affordable than any book before.

To put the history of paper in context means knowing its rivals, the other traditional writing materials and the ­cultures that used them. Kurlansky talks to us about everything from Chinese oracle bones, cuneiform tablets and Egyptian papyrus to Mexican amate — the bark-based writing material, not a true paper, on which the Aztecs wrote.