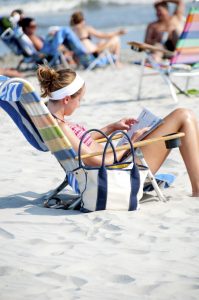 As children approach the last day of school, they may be gleefully thinking about no more pencils and no more books, but the reality is that when they chuck the latter, they are starting on a dangerous learning curve: the summer slide.  What we know is that if children don’t read during the summer, those hard-earned reading skills they developed during the school year will decline, and they will begin the next year as less able readers than they were the previous June.  This downward spiral is sharper for striving readers, but is noticeable for able readers as well.

Summer reading clubs and library programming attempt to fill in some of those gaps, but perhaps before they begin we should consider customizing summer reading.

The best summer reads for children are books they select themselves.  To paraphrase Hazel Rochman, former book reviewer at Booklist: Kids won’t read just because it’s good for them, but because the books they encounter are about them. Consequently, now is the perfect time for librarians to become proactive to help them narrow their universe of choices, to remind them of what is available, and to encourage them to participate in a little planning as they consider possible summer reading choices.

Those with access to TeachingBooks.net (www.teachingbooks.net) will find a handy bookmark maker that saves and prints titles children have selected themselves or books librarians and friends recommend. A Plan Your Summer Reading program at the public library can incorporate a crafts activity where youngsters can make their own personalized bookmarks or lists or booklets of titles they may want to check out later.

But what to suggest?  Most important, we need to remember to read and suggest not what we love, but what we think they will love.  As librarians we are not entrusted with this fabulous profession to feed our own reading tastes; we are here to support free, voluntary reading in the children we serve.

Personally, you may not be drawn to horror or general nonfiction or graphic novels.  But many readers are, and suggestions should include titles such as Took or Boots On the Ground: America’s War in Vietnam or The Nameless City.  Many youngsters will gravitate to best sellers, such as The Hate U Give or Refugee.  Others will go to the movies and see A Wrinkle in Time, and afterwards have an interest in reading the book and perhaps broaden this interest to ancillary titles such as the graphic novel adaptation or the biographical Becoming Madeline.  And they will get caught up in plot driven stories such as Aru Shah and the End of Time or character driven works such as Truth As Told By Mason Buttle or mysteries of the world around them in Giant Squid or Neighborhood Sharks.  The list goes on and on: series books, poetry, photo essays, and novels in verse are all important pieces of some child’s reading life and should be booktalked and displayed prominently so each child can think about his or her personalized summer reading list.

I suspect we won’t be wandering along the summer shores and see really young children sprawled on deck chairs reading Baby Monkey, Private Eye. But, just because summer signals vacation, doesn’t mean that their parents or caregivers can’t create some quiet time to enjoy some well chosen books to read.  Again, librarians may want to conduct special programs for parents of very young children, encouraging them to preselect and pack some great titles in their suitcases so they can continue reading all summer long.

Let’s don’t let reading take a vacation, but rather be an integral part of any child’s summer.

Volkins, Charlotte Jones and Léna Roy.  Becoming Madeleine: A Biography of the Author By Her Granddaughters.  New York: Farrar, 2018.