Getting to Know Sy Montgomery 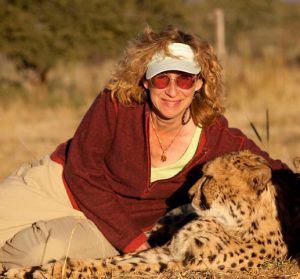 Do you think of writing children’s books as a “desk job”?  Well, there is some sitting and writing involved but there is so much more to the job!  Take Sy Montgomery as an example.  Researching her books meant she had to learn how to scuba dive and go swimming with piranhas and electric eels.  She was chased by an angry gorilla in Zaire and spent time in a pit with thousands of snakes in Canada.  She has had to camp out for weeks in primitive conditions in Africa and pick her way through unexploded bombs in Southeast Asia!

Her fascination with biology started at a young age, with her 7th grade biology teacher Mr. Profit and the live bats he would bring in to class to be examined.  She was so disappointed when her semester of biology was over and she had to move on to Home Economics.  “I already knew how to sew and cook and couldn’t believe they were taking me away from biology to make me ‘learn’ how to bake a cake!”  She read biographies of Jane Goodall and Dian Fossey and realized that she wanted to do what they did.  (Her first book ended up being about Goodall, Fossey and her co-researcher, Birute Galdikas, Walking With the Great Apes, in 1991).  At the same time, she was reading animal books such as Lassie Come Home, Charlotte’s Web, and Black Beauty.  This was not only reinforcing her love of animals but allowing her to soak up great writing and proper grammar.  Her grasp of the technical science along with her writing skills has made her, as the New York Times says, “equal parts poet and scientist”.

Sy grew up in a military family, living in many parts of the world.  This made her totally unafraid of traveling to remote areas when the time came to do field research.  Her father, an Army General who survived World War II’s Bataan Death March, was a great role model for venturing out into the unknown and staying calm in tough circumstances.

Sy has developed many contacts in the science world and relies on them to keep her up-to-date on what is going on in the world of biology and what fascinating book topics she can tackle next.  Her involvement in science conferences has also allowed her to find great photographers like Nic Bishop to work with on her books.  Nic doesn’t do underwater photography so she had to find Keith Ellenbogen, a talented underwater photographer, to work on her recent marine projects.

One would think that research scientists would be very busy and somewhat protective of their research.  But Sy has found that they almost always welcome her “with extraordinary generosity and enthusiasm!  Not because of who I am, but because of the kids who will read the book about their work.”  Apparently they see exposure in her books as a way to get word of their work out to an important audience – future scientists and taxpayers who support scientific research.

Nonfiction fans can look forward to two great projects coming up that will lure Sy Montgomery from her 175-year-old farmhouse and two-year-old border collie puppy Thurber in New Hampshire.  In the fall of 2017 she will start research on a book about the comeback of the California condor.  She has found a new photographer, Tia Strombeck, who specializes in bird photography for this project.  Then, in the spring of 2018, she will start to study the giant manta rays off the coast of Ecuador and Peru.  In the meantime, we can find out how a small fish called a piaba is helping to keep the Amazon River healthy in Sy’s Amazon Adventure, coming in July 2017.  She certainly keeps her publisher, Houghton Mifflin, busy because in the Spring of 2018 there is another book to be published, The Hyena Scientist.  This is her latest addition to the very popular series, Scientists in the Field, that she helped launch in 1999 with The Snake Scientist.

In addition to researching and writing books for both children and adults and attending science conferences, Sy tries to get out and do a number of school visits.  “Some kids are so into animals and writing that after my visit, we become pen pals. One child I met at a school here in New Hampshire later grew up to become my assistant!”

What creatures will be probably never see featured in a book by Sy Montgomery?  “I dislike ticks and leeches, and probably wouldn’t write about them because there are so many others whose company I enjoy I’d rather do first!”  With a world full of creatures to study, we are sure to see many more books from Sy Montgomery!