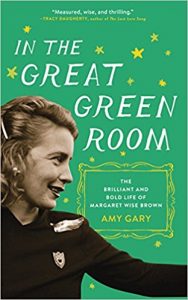 In the Great Green Room: The Brilliant and Bold Life of Margaret Wise Brown, by Amy Gary. Published by Flatiron Books in 2016, 288 pp.

Margaret Wise Brown was born into an affluent family and lived extravagantly.  She authored many books but is best known for the children’s classics Goodnight Moon and The Runaway Bunny.  Brown’s personal life was, to say the least, adventurous and daring.  Her life was full of travel, extravagant experiences, a secret relationship, and an engagement to a man that happened to be the son of a Rockefeller and a Carnegie.

This book begins with the birth of Margaret, arriving two weeks early, and documents her imaginative childhood that was her inspiration for her writing.  Her childhood was full of adventure and Margaret had a terrible time in school.  At the age of fourteen, Margaret spent two years studying abroad while her Father was in India for work. She thought this was going to be an exciting adventure but was disappointed by the rules, chaperones and discipline at the school.  She missed her family and longed for a life with more freedom.  Her college years were spent at Hollins College where she thrived at the social scene.  Margaret went to Hollins with every intention of being an excellent student, but she had the inability to balance her schoolwork with her social life and her grades were failing.  She did not leave the school though; the Depression had taken a toll on the schools’ attendance so the school was more lenient, allowing her to stay to finish her education.

Margaret started her career by helping to shape the curriculum for the Bank Street School for Children.    She worked to create stories that would rise above the traditional fairy tales allowing girls to see themselves as equal to boys.  She spent hours studying, researching and observing to precisely capture the object or subject from a child’s perspective. She was renowned for her prolific writing and business savvy.  Margaret died unexpectedly at the age of forty-two.  In 1990, author Amy Gary discovered hundreds of unpublished works by Margaret Wise Brown in Margaret’s sister’s attic.  Since then, Gary has catalogued, edited and researched all of Brown’s writings.

This book gives the reader great insight into the life of Margaret Wise Brown and how her life experiences helped her create her imaginative, creative, whimsical writing that she was so well known for.