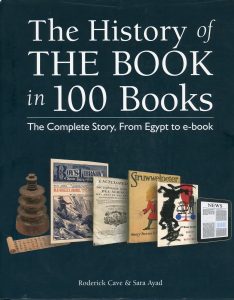 The History of the Book in 100 Books: The Complete Story, From Egypt to Ebook, by Roderick Cave and Sara Ayad.  Published by Firefly Books in 2014.  288 pp.

Two serious book scholars pick out 100 books that they feel best represent the role books have played in human history.  This takes them all the way back to prehistoric cavemen and all over the world.  We learn all about the different forms the book has taken and all the inventions that had to take place for the book to play the huge role it has played.

Pictures play an important role in telling this story and they are very important in the early part of the book.  The early Chinese, Greek, and Celtic books are works of art as much as they are texts and it is fascinating to look at the sample pages.

But I think my favorite part of the book is when it gets to the 1500s and we start to meet the historic figures that laid the groundwork for the world we know today.  And, since this book centers on books, we suddenly realize how important it was for these figures to have published their work.  It is not hard to imagine that if they had not published their books the world would not have developed in the way it did and we certainly would not be familiar with their names today.  I am thinking of Tycho Brahe the Danish astronomer, Isaac Newton’s Principles of Natural Philosophy, Carl Linnaeus the Swedish biologist, and others.

We also meet lesser-known figures who made important contributions such as Elizabeth Blackwell, an English illustrator of flowers in the early 1700s; Vesalius, a Venetian in the mid-1500s who documented his human autopsies in a book; and Jacob Perkins, an inventor in the mid-1800s who invented important advances in printing before he got around to inventing refrigeration.

The book ends up by covering the last century and the issue of ebooks.  This may be the least compelling part of the book because it covers the most familiar ground.  And their comments on ebooks, (mostly negative), are just conjecture, unlike the very specific history in the rest of the book.

At the end there is a glossary and does any industry have such wonderful words?  Boustrophedon, duodecimo, harlequinades, palimpsest, Carolingian Miniscule?   Just repeat those words and it is obvious that the making of books is the most magic of arts there is!