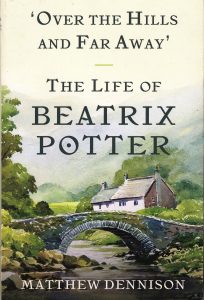 Over the Hills and Far Away: The Life of Beatrix Potter, by Matthew Dennison.  Pegasus Books 2017.  262 pages

This book was a very interesting description of the life of Beatrix Potter. The author uses phrases from her books and her animal sketches to describe how she used her own life experiences to create the children’s books that have been enjoyed by so many for over a hundred years.

The Potters lived in London in one of only eight new houses build in 1862.  It was a mid-Victorian three-story urban development located at 2 Bolton Gardens. Beatrix was born July 28, 1866.  She was a pretty young girl with blue eyes and golden locks of hair.  Her parents were not too involved with her everyday life.  Most of her time was spent with her nurse.  Her nurse’s taste for fairy tales and her firm belief in fairies would shape Beatrix’s imaginative life in the long term.   Her parents didn’t trouble themselves with friends for Beatrix. Other people’s children threatened germs, or worse, bad influences. She loved riddles, rhymes and nonsense poems that were also introduced to her by her nurse.  That love stayed with her and influenced her own writing style.  The Potters were Unitarians, so Beatrix’s nurse also chose to read material to Beatrix like “Uncle Tom’s Cabin” and “The Water Babies” that encouraged simple Christian goodness and compassion.

Beatrix’s parents always took sketchbooks with them on visits to the country or to the coast.  Beatrix’s mother, Helen, also painted and although her father, Rupert, did not paint, he inherited his taste for art from his own father, one-time president of the Manchester School of Art.  Rupert also had an enthusiasm for photography and won a clutch of medals from the Photographers Society of London.  Beatrix started her drawing at an early age and many of her sketches were of animals she encountered while living at Bolton Gardens or on holiday in the country.

Beatrix had a passion for plants, insects, fossils and fungi.  She enjoyed the precise recording of as many varieties as possible and she painted and photographed her findings and put them into a journal.

Beatrix’s initial stories began as letters to an ill child, Noel, the eldest of the children of her former governess.  It was a story about four little rabbits whose names were Flopsy, Mopsy, Cottontail and Peter.  As she wrote, she illustrated each of the eight pages.  The following day her second letter began “once upon a time there was a frog called Mr. Jeremy Fisher, and he lived in a little house on the bank of a river.” Beatrix addressed it to Noel’s brother Eric. Eight years separate Beatrix’s story letter to Noel from a privately printed edition of “The Tale of Peter Rabbit” on December 16, 1901. This was the start of her legendary career as an author of children’s literature that will last over a hundred years.

Beatrix did eventually find love and marry at the age of 51.  She was a savvy businesswoman owning multiple properties and a large sheep farm as well as a best-selling author.  Throughout the 1930’s Beatrix had fallen ill several times and was confined to bed repeatedly. Her last story she had written, “Wag-by-Wall” was about an old woman and a kettle.  Beatrix died six months short of publication on December 22, 1943.  She never read “Wag-by-Wall” in print. Although Beatrix Potter never had children of her own, her book characters and tales reside in the hearts of countless children and adults throughout the world.