Getting to Know Neal Porter 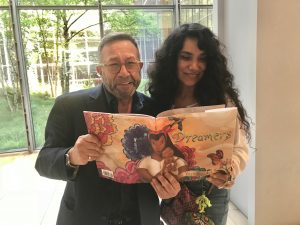 There are mysterious invisible beings behind the scenes in children’s books, picking the books to be published, pairing illustrators with authors, working with both the authors and illustrators to shape the book into its finished form.  We wanted to find out more about this powerful but quiet job so we talked with Neal Porter, one of the most experienced and respected editors in the children’s book business.

Neal entered publishing in the late 1970s somewhat serendipitously, having studied theatre at NYU and seeing himself as a theatre critic.  However, after graduation he needed a job and one presented itself in the college textbook department at St. Martin’s Press.  He quickly moved from there into marketing at several different trade publishers, and then transitioned into editing.  He moved up into more administrative publishing roles but then decided he really preferred editing.  He now has his own imprint at Holiday House where he specializes in picture books and illustrated nonfiction.

It is typical for children’s book editors to specialize in books of a certain genre because, as Neal says, “each genre causes an editor to exercise a different set of muscles, with some overlap.”  His equal love for words and visuals drew him to picture books.  One can’t help but wonder if his background in theatre might have given him a feel for picture books and the way they are “staged”.  Other picture book greats, such as Maurice Sendak and Brian Selznick, have also had extensive backgrounds in theatre.

A book editor has to be flexible because each author/illustrator goes about their creative work differently and needs different input from their editor.  For instance, Laura Vaccaro Seeger keeps a long list of book ideas in her journal and she goes through them with Neal, playing a game they call “What If” to solidify the best possibilities into something to work on.  As for other illustrators, “When I work with Yuyi Morales I know to expect the unexpected, like Dreamers, which is coming out this fall.  Jason Chin’s meticulous research and attention to detail, as in last year’s Grand Canyon, dazzles me.  Working with Phil and Erin Stead challenges me because they take their craft so seriously.”  And of course there are the fascinating new authors and artists “who never fail to surprise and delight me.”

One interesting question is how children’s book editors keep in touch with the final consumer of their product – the children.  Authors/illustrators these days tend to do a fair amount of school and bookstore visits so they talk to a lot of kids and see their reactions to their work.  But editors don’t have that kind of opportunity.  According to Neal, editors are much more dependent on the input of librarians and teachers at meetings such as the American Library Association.  So it is the editors at the booth that you should talk to about problems with a title or books you feel need to be written, not the marketing people or the authors who are signing.  The editors need that kind of feedback and it is much more likely to have an impact on future books.

Since there is not a lot of market research done in children’s books this puts a lot of pressure on editors to pick the right books and make sure their publishing house sells enough books and wins plenty of awards.  As Neal says, “I publish out of passion – and hope that readers will feel as I do about a given title.”  As an example, he cites the seemingly unlikely success of the quiet book A Sick Day for Amos McGee by Erin and Philip Stead.  “This quiet, thoughtful book didn’t have a child in sight and was published with little fanfare at a time when noisy books like Pinkalicious and Fancy Nancy were the rage.  A Caldecott Medal and a few hundreds of thousands of copies later, it succeeded because it struck an emotional chord with readers.”

The editor’s job has changed quite a bit according to Neal Porter, from when the greats that he learned from such as Ursula Nordstrom, Margaret McElderry, Michael di Capua, and Jean Karl ruled the children’s book world.  Children’s books are not as focused on libraries because the market has broadened out to more channels.  Amazon has had an enormous impact, making children’s books big business.  Children’s books are more of an international business now, with authors, illustrators, production and customers spread across the globe.  The traditional media seems to have less room for considering books but there is a whole new universe of bloggers and social media discussing books.

At a time when self-publishing and marketing directly by social media is a hot topic, it is important to recognize that the professional children’s book editors in publishing help to keep the books relevant, diverse and of high quality.