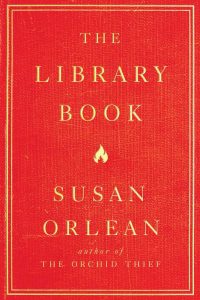 The author is a long-time writer at The New Yorker, best-known for her nonfiction book, The Orchid Thief, about a con artist who specialized in stealing rare and very valuable orchid plants.  In this book, her first grader’s homework assignment sparks her interest in the Los Angeles Public Library fire in April 1986.  This fire, the largest public library fire in U.S. history, failed to get much national attention when it took place because it happened in the same week as the Chernobyl meltdown and a large drop in the stock market.  So 30 years later Orlean started doing the deep research and the intense personal interviews about the fire that have become her trademark.

In the end, this book turned into three separate interrelated strands that she weaves together seamlessly.  First, there is the story of the 1986 library fire and the long investigation into what caused it.  The investigators eventually focused on a wannabee actor, Harry Peak, as the potential arsonist, but he was never found guilty at trial.  The second strand is the long history of the Los Angeles Public Library from the 1870s right up until the present day.  From the book it is apparent that Orlean invested hundreds of hours over several years observing the various departments of the Los Angeles Public Library and getting to know dozens of key staff members.

In the third strand, Orlean uses the Los Angeles Public Library as a jumping-off point for exploring the history and unique nature of libraries throughout history and all around the world.  By the time you finish the book you feel as if you have experienced a passionate love letter to libraries, as well as a cautionary tale for librarians about how quickly their unique collections could go up in smoke!