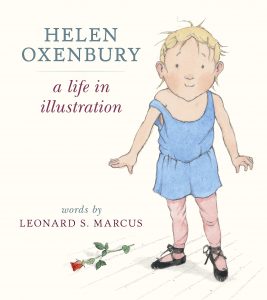 Helen Oxenbury: A Life in Illustration

Leonard S. Marcus is one of the world’s leading writers about children’s books and their illustrations.  This book is a timeline of Helen Oxenbury’s career and growth as an author and an artist.  They spoke about Helen’s earliest memories of books, her early childhood in England, the challenges of being a working mother and how her experiences as a mother were the foundation for the material she used in her illustrations for fifty years.

As a young child, Helen suffered from asthma which periodically left her bedridden.  During this time, drawing became a distraction from her illness.  She was not an avid reader at the time so her mother would read aloud Lewis Carroll’s Alice books to her which left a lasting impression.  At the time, children’s books with full-color art were a scarce commodity and publishers treated color as a treasure that should be used sparingly.  By the age of six, Helen found that she enjoyed drawing people best of all.  She would wait for a family member to be absorbed in some activity, then would take out her art supplies and settle in to begin drawing.  Helen recalls that drawing was one of the few things she had been good at in school.

Helen enrolled in London’s Central School of Art and Design.  It was there that she met graphic design and illustration student John Burningham who she later married.  They had both worked on their careers and traveled and she found a job in Israel’s national theater in Tel Aviv working in set design.  They moved back to England in the early 60’s and John had a children’s book published and won the Kate Greenaway Medal in 1963.  Soon afterward, John and Helen married and moved to Hampstead, London.

The book is broken into decades and shows the beautiful illustration and works done by Helen through those years showing her growth as both an author and illustrator.  It is an interesting read and a joy to understand how she was able to put so much expression into the faces of people using just dots for eyes.  The book finishes with a timeline of Helen’s works through her most recent BookTrust Lifetime Achievement Award.

This is an enjoyable read on the life, books and beautiful illustrations of Helen Oxenbury, one of the UK’s most successful illustrators.