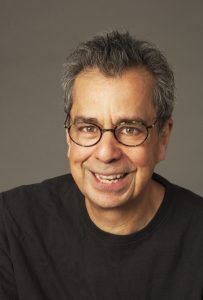 Getting to Know Chris Grabenstein

“It’s Grabenstein, rhymes with Frankenstein.”  So goes the answer to the question most asked of this prolific writer of middle school novels.  Although he didn’t know it at the time, Chris spent much of his life preparing to write children’s books.  He did improvisational comedy as a young man where he learned “There is only one rule in improv: to say ‘Yes’ and move the story forward. So, when I am writing my first drafts, I just say ‘Yes” to whatever pops into my imagination and move forward, knowing that my first draft will NEVER be my final draft.”   He has also found that improv is “a great way to beat writer’s block.”

After improv he moved on to work in advertising at J. Walter Thompson in New York, creating ads for Burger King, Prudential, Miller Lite, KFC, etc.  In advertising he learned from his boss, James Patterson, (remember that name, he’ll come up later!) that the key in advertising was “to grab the viewer/reader’s attention in the first line or seconds and then give them a reward for sticking with you….In writing, we have to grab readers, even the most reluctant ones, by the eyeballs and never let go!”

But perhaps his most important preparation for writing children’s books was when he was a reluctant reader as a child himself.  Instead of reading real books he was pushed to read the color-coded SRA texts.  So in protest he mostly read MAD Magazine.  He learned how important humor was for young readers and how to capture the attention of a reluctant reader.  “I prefer to think of us (reluctant readers) as Super Critical Readers.  We only want to read something fun and fast paced that will ignite a movie in our minds.”

After he graduated from advertising, Chris started writing books for adults.  But if you are an adult and a big fan of his John Ceepak mysteries hoping for a new one to be published, you’re out of luck.  Chris quickly found that young people make much better fans than adults.  “Adults never stand in a signing line hugging your books.  They don’t dress up like your characters.  And they don’t send you illustrated thank you notes.”  So, rather than any more adult books, there will be a steady stream of children’s books from Chris Grabenstein over the next few years.  The Fall of 18 brings a new Max Einstein with James Patterson, The Genius Experiment.  Then the Spring of 19 brings the fourth Wonderland book, Beach Battle Blowout, as well as the fourth Lemoncello book, Mr. Lemoncello’s All Star Breakout Game and the start of a new series with James Patterson, Katts Vs. Doggs.  Scheduled in the Fall of 2019 is a book Chris is writing with his wife, J.J. Grabenstein (rhymes with Frankenstein) called Shine!  There should also be another Treasure Hunters adventure with James Patterson, as well as yet another Max Einstein book in the Fall of 19, if Chris doesn’t have a mental breakdown first!

Chris’s partnership with James Patterson is very interesting.  James Patterson left advertising and became an adult author where he routinely dominates the best-seller list and frequently has his books made into movies.  But he also wanted to do books for young readers.  He had so little extra time and so many ideas for books that he decided to write them out as an outline with the characters and key plot elements described.  Then Chris writes a rough draft of the book.  Then Chris and James go back and forth refining the book until they are happy with it.  Then James actually writes the final draft for the publisher.  No doubt it was their shared background in advertising that allows Chris and James to work together to create so many seamless novels in so many diverse genres.

With so many books to populate, Chris is always on the lookout for interesting people to base characters on.  His wife once gave him a T shirt that said “Be careful what you say, you might end up in one of my books.”  Mr. Lemoncello is based on Jim Henson and Robin Williams.  Henson was the creator of the Muppets and Chris did some writing for him in the 1980s.  Chris knew the comedian and actor Robin Williams from his improv days.  Both impressed him with their wild imaginations and thus live on in Mr. Lemoncello.  “Miguel Fernandez in the Lemoncello books is based on a fifth grader I was tutoring at the time in my church’s Homework Help program.  Gloria Ortega in the Wonderland books is based on a hard-working secretary I knew in my temp typist days.”  And so it goes throughout New York City.  If he visits your school you might end up in one of his books too!

Young readers and librarians are happy that Chris Grabenstein went to all that effort to prepare to write children’s books and that he has finally found where he belongs!