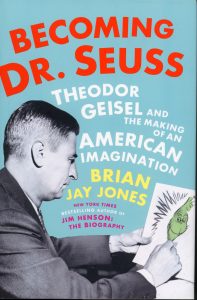 Becoming Dr. Seuss:  Theodor Geisel and the Making of an American Imagination

A very detailed biography of the great author and illustrator of children’s books. From growing up in Springfield, Massachusetts, to his college days at Dartmouth and Oxford, to his careers in cartoons and advertising, to his days in the Army during World War II, to his gradual development into a household name as a children’s book author.

Jones looks at Ted Geisel warts and all. He looks at his incredible genius and work ethic but he does not flinch from pointing out his overbearing ego and the stereotypes he sometimes used. At the age of 23 Geisel married Helen Palmer and she was to be the organizing and steadying influence, and number one editor, behind everything he did for the next 40 years until she tragically committed suicide in 1967.

By necessity, the Geisels were located in New York City in the late 1920s and 1930s because that’s where the magazines were that Ted sold his cartoons to, and then the ad agencies that he created ads for. But the Geisels fell in love with a quiet bit of the beautiful California coast and built a lovely home north of San Diego in 1948. Ted would live there for the rest of his life, but quiet little La Jolla California would gradually get more and more developed and busy.

Jones spends a great deal of time detailing the development and issues of each book Geisel was involved in, from And to Think That I Saw It on Mulberry Street in 1937 to Oh, the Places You’ll Go! in 1990. So we learn a lot about his publisher Random House and key people there such as Bennett and Phyllis Cerf, Robert Bernstein and Michael Frith. I didn’t realize that Ted Geisel actually worked with Phyllis Cerf and his wife Helen as publishers of Beginner Books, a subsidiary of Random House, for many years. There, he helped develop such authors as the Berenstains and P.D. Eastman.

The only disappointing thing about this excellent book on a fascinating subject is that there is only a small group of pictures in the middle of the book. This hardly seems sufficient to capture the work of such a visually oriented artist as Dr. Seuss.