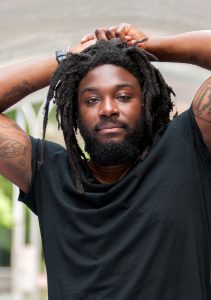 Getting to Know Jason Reynolds

Jason Reynolds could easily have been lost to children’s literature.  As a child and even as a teen he was not a reader at all.  He was into hip hop music and poetry and disliked books.  Even after he started writing he did not specifically try to write YA fiction.  His first book, My Name is Jason. Mine Too., was somewhat arbitrarily placed in the young adult category and it was this happenstance that got Jason started down the path towards a prolific string of contemporary urban, African American novels for young people.

As a young man he felt he did not have enough connection with the characters and stories in books and he did not want to be required to read certain books, or graded on his reaction to them.  “Had there been books written with more of a contemporary bent – and as it pertains to me, a contemporary cultural bent – I think I would’ve been more engaged.”

Jason tries to write these books that would have drawn him in for his readers now but he knows that there is a lot of competition these days from social media.  “Social media is easier and better marketed.”  The trick is “to figure out why it’s so appealing, and to tailor books (a bit) to work with where they are.”  It’s not that books aren’t just as cool as social media.  Jason asserts “If I know that books are cool now, what makes us think the youth of today can’t feel the same if they’re given the right books?… Though I know many of us are working VERY hard, I often wonder are we being creative enough.”

Jason is known for being very prolific.  He has produced 11 major works in just the last 4 years.  Often he is writing his next book while he finishes editing his latest work.  Jason’s latest has been a Spiderman book for the Marvel superhero series in the Spring and an addition to his Track series in the Fall.  The Spiderman book, Miles Morales, was his first experience writing within fairly specific guidelines.  “This is their intellectual property, so obviously there are all sorts of things you can’t say or do.”  The new Track book, Lu, was only the second time Jason made his main character female.  This didn’t faze Jason because he felt he had a good feel for female voices from all the girls he grew up with.  His main concern was not to fall into a stereotype or cliché for her character.  Lu is the fourth in the Track series, in which he devotes each book to a different member of an inner city middle school track team.  His latest book, publishing in Fall of 2019, is another realistic urban story called Look Both Ways.

Going forward, Jason is thinking about working in the fantasy genre.  “I’m actually just into storytelling.  It doesn’t really matter the genre.”  He will also have to deal with making one of his books into a movie because Long Way Down has been optioned for the cinema.  For a devoted movie fan like Jason, “I go to the movies all the time,” this will be a big thrill but a big challenge to see his book move onto the screen.  But hopefully Hollywood won’t get in the way of more experiments, more great novels and the continuation of the Track series from Jason Reynolds!