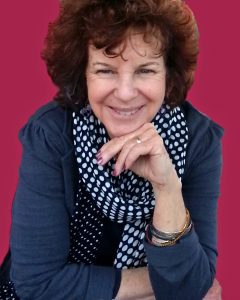 Getting to Know Deborah Hopkinson

What does the building of the Empire State Building, cholera epidemics, the discovery of the North Pole, the Underground Railroad and women’s professional baseball all have to do with each other?  Not much, except they all have captured the attention of, and have earned a children’s book by, Deborah Hopkinson.  She has been writing children’s nonfiction and historical fiction for 25 years so this wide variety of subjects shows how much ground you can cover in 25 years.  It also demonstrates her philosophy that, as she tells students, “having to write about something is the best way to learn about a subject”.  She doesn’t write about what she knows but what she would like to know about.

Her current focus is on the many facets of World War II.  She has recently written D-Day, Dive about submarine warfare, and Courage & Defiance about Danish Resistance fighters.  Soon to be published will be Refugees and Survivors  in 2020 about children escaping Nazi Germany and How I Became a Spy in February 2019, a novel set in 1944 London.  She is fascinated by the influence of World War II on the present day and feels like the timing is right for books on the subject.  “June 2019 marks the 75th anniversary of D-Day…Many of those who took part in World War II have passed away recently.”

Because she has written for all different age groups, Deborah can easily adapt her school appearances for different grade levels.  Lately, in these days of fake news, she always stresses critical thinking and research skills.  “I share information about the Stanford History Education Group, which has some wonderful resources for educators to help students learn to read like historians.  (https://sheg.stanford.edu/).”  Deborah also recommends Steven Johnson’s PBS series, How We Got to Now, to teachers and librarians who want to spark more interest in STEM subjects.  Her school visits with younger grades often involve choral reading and activities while she attempts to take older students along on her research journey through her sources.  Her school visits are all enjoyable, except of course the two times her car broke down in the middle of nowhere and the time she went to the hospital after tripping on a subway stairs!

These days, to help develop better factual instincts in young readers, she is more careful with each new book to try to provide the very best backmatter, timelines, bibliographies, etc. and try to make them fun and engaging so students read them, rather than skipping past them.

When asked, Deborah admits she is probably more historian than writer.  When she was deep in the plotting of her new middle grade spy mystery, How I Became a Spy, and having her young British protagonists follow clues like Sherlock Holmes, it was a surprising little historical fact that pleased her the most – Churchill’s spy operation, the Special Operations Executive, was located on Baker Street in London!

Deborah worked part-time as a grant-writer until 2014 when she started writing books full-time.  Since she became full-time she has had time to write more series nonfiction books.  These books are becoming a larger part of children’s literature and they take a more organized and structured approach to the subjects covered by the school curriculum.  Her latest books in this category will be Where is the Kremlin? in May 2019 and What is the Women’s Rights Movement? in October 2018.  She admits one of the challenges of series nonfiction for younger readers is not overwhelming them with too many facts.  She thinks “Series nonfiction books can be stepping stones for students to want to learn more.”    Her pet peeve about the series nonfiction of the past (and graphic novel nonfiction of the present)?  –“Don’t make up dialogue!  Hopefully, the days of ‘fictionalized nonfiction’ are behind us.”

It’s amazing how long some book topics percolate below the surface.  Deborah became interested in Dr. Carter Woodson when her book Up Before Daybreak won the Woodson Award in 2007.  It will be February 2019 when her picture book on his life, Carter Reads a Newspaper, will finally make it into print, illustrated by the talented Don Tate, another winner of the Carter Woodson Book Award!