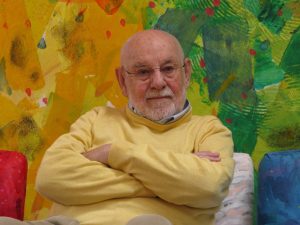 Getting to Know Eric Carle

This June it will be 50 years since the publishing of The Very Hungry Caterpillar, the first solo children’s book by Eric Carle.  Just two years earlier, in 1967, he had illustrated his first children’s book, Brown Bear, Brown Bear, What Do You See?, written by Bill Martin, Jr.  Bill Martin had noticed a red lobster in an ad Eric had done for an advertising agency he was working at and thought it showed children’s book potential.

Eric has been an artist from a very young age.  He went to art school in his native Germany just as World War II had ended and he believes “I think of my colorful illustrations, the bright colors I use in my work – as a kind of antidote to the grays and browns of my childhood.”  An early job after graduation was designing posters for Amerika Haus, a good-will office set up by the American government to promote the culture of America in Germany after the War.  “I think of my illustrations to this day, especially my book covers, as little posters that capture the attention of the reader with big, bold shapes.”

Eric has seen quite a few changes in the children’s book world since The Very Hungry Caterpillar came out.  He hasn’t changed his process much but when he turns in his finished book computerized technology has vastly changed how his books are produced and distributed around the world.  Another difference he notes, “When I first started out, the contracts I received from publishers were maybe 3 pages long.  Now, they are more than 32 pages long!  Longer sometimes than the book itself!”

Eric was a pioneer in adding features to the physical book such as audio chips, little flashing lights and tactile elements.  In his mind this made his books “like a toy you can read, and a book you can touch.  This is my attempt to try and bridge the worlds of home and school.”  It also foreshadowed the morphing of the physical book into the multimedia experience of an ebook.

Another contribution Eric has made to the world of children’s books, as if his picture books weren’t enough, is the Eric Carle Museum of Picture Book Art.  This Museum, opened in Amherst Massachusetts in 2002, was inspired by picture book museums Eric and his wife, Bobbie, visited while traveling in Japan many years ago.  The Museum quickly grew into a place where illustrators, educators, parents and children can go to enjoy and learn more about the magic that happens in a picture book.

Eric has a group of picture book artists working today that are his favorites, including Ashley Bryan, Lisbeth Zwerger, Jerry Pinkney and Chris Van Allsburg.  His criteria for getting on this list? – “Each of these picture book artists has an individual and distinctive style and approach and each one speaks from his or her soul.”

Eric is not out on the road much these days making school visits but he gets a steady stream of fanmail over his website and facebook page.  His most memorable fanmail?  For some reason the one that quickly comes to mind and that tickled his fancy was a line from a boy in Texas, “Dear Eric, I would like to visit you but I am not allowed to cross the street.”  Wouldn’t we all like to visit Eric Carle!