The Origin Of The Name “Bound to Stay Bound Books” 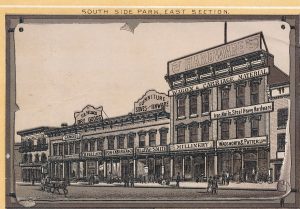 South Side of the Jacksonville, Ill., Public Square, 1892

The company’s original name was New Method Book Bindery because when it was founded, in 1920, a new machine had just been invented, the oversewing machine.  This machine would do fairly quickly what it would formerly take many people a lot of laborious hours to do.  Thus it seemed like the company, using these new oversewing machines, was using a “new method” to bind books.

For the first three years of its existence, the bindery was on the second floor of a brick building at 220 South Main Street.  This second floor space had formerly been Degan’s Dance Hall and the Purity Candy Company was located on the first floor of the building.

This building was located only a block away from Jacksonville’s busy public square.  In 1920 Jacksonville Illinois was a small town of 15,000 people, the county seat of Morgan County.  The square was filled with shops, banks and office buildings, so there was quite a bit of pedestrian traffic all around the downtown area.

Since the bindery was on the second floor of the building and it would have been terribly awkward to haul heavy stacks of books up and down the stairs, New Method had a hoist installed to get shipments up to and down from the second floor.  One day the chain broke on the hoist as they were moving a large load of books down to a wagon to be sent back to the customer, the Des Moines Iowa Public Library.  The wooden box containing the books broke and the books went flying all around the alley.

This catastrophe created quite a bit of entertainment for passing pedestrians and nearby shopkeepers so a crowd soon formed.  It soon became evident that, out of all those hundreds of books crashing to the ground, only one corner of one book actually showed any noticeable damage.  This prompted one citizen in the crowd to remark “Those books certainly were bound to stay bound!”