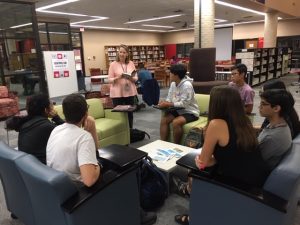 In the 1930s, a time when adolescence was barely defined, teenagers were often discouraged from using libraries. Margaret Alexander Edwards, aka the patron saint of YA librarians, challenged these long-held beliefs by advocating service to this population.  She gave short shrift to the theory that young adults entered libraries knowing what they wanted, would ask for help if needed, and resent a librarian’s unsolicited advice. Instead, Edwards believed it was the librarian’s responsibility to give confident front-line service to help her teenage patrons discover and enjoy what she saw as the foundation of the library’s business: recreational reading.

That tenet formed the basis for extensive booktalking, a practice that now enjoys a resurgence, particularly in school libraries. Over the years, booktalking has expanded from programming aimed exclusively at young adults to a practice that now includes all our patrons. Because of that popularity, this column and the next one will focus on booktalking.

Turn the compound word around and you have a precise definition: Booktalking is talking about books.  And, according to Edwards, that talking has a twofold purpose: to model reading for pleasure and help young adults expand their reading tastes.  Yes, she believed that she could and should elevate reading interests from the ‘junior novels’ available to YAs during that time to more ‘substantial’ literature, but her schema manifested itself in offering a variety of books for teenagers’ consideration rather than in arm twisting patrons to check out a particular volume.

Booktalking’s  a natural extension of what many of us want to do when we see a good movie, try a successful recipe, or watch a thrilling sports game: tell someone about it.  But booktalking is not as simple and unstructured as spontaneous conversations with our friends, nor is it a reflection of our tastes. Booktalking requires rigorous preparation and deep knowledge of both our collections and our patrons.

For so much of our lives, reading has been a personal act — a leisure activity, a means for finding information, or a deep and powerful pursuit that allows us to understand ourselves and our world.  But in our professional roles as librarians, we often have to leave those familiar stances and look at children’s and YA literature as an outside observer, sometimes as a critic and sometimes as a potential intermediary between books and our customers. In that role as matchmaker, we will often recommend books that we do not usually favor for our own personal, leisure reading to customers frequently unlike our past or present selves.  Personal confession here: I struggled through the reading of all three volumes in the Lord of The Rings trilogy, yet time and again I’ve included these titles in booktalks, and time and again they land in the hands of appreciative readers. Here, the pleasure in reading comes not from personally interacting with a particular text, but from opening doors for someone else to do so.

Not only do we recommend books that fall outside our typical range of reading, but we also refrain as much as possible from giving an opinion. “I loved this book” is best left for conversations with literary equals such as colleagues and friends. If children, particularly striving readers, find your beloved book less than satisfactory, they will often believe that there is something wrong with them instead of a mismatch between book and reader. Adults imposing their tastes on children create a form of literary harassment that we should avoid just as much as we forestall recommending books because of some outside reading level or number of pages or font size.

Booktalking is a tool that can encourage wide reading among both our patrons and ourselves.  If we want to be booktalkers, then we are committing ourselves to being readers because, of course, we cannot booktalk books we haven’t read. Even the youngest children can see through such a ruse and our message becomes “Do as I say do, rather than as I do.”

Booktalking provides a platform for us, as librarians, to show our excitement in the pleasures one can find in reading.  In addition, it establishes a literary connection between young people and a knowledgeable librarian. And that’s a good day’s work in anyone’s book.