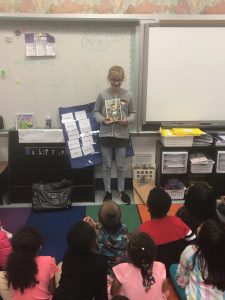 Last year my grandson, then a sophomore in college, took a marketing course and had to complete a pretty standard assignment that involved inventing a product, establishing a business, and designing a marketing plan. He constructed his product and created a series of tried and true sales strategies, such as designing business cards, a website, and a logo.   But then he wondered: What would happen if a friend of his, a local Internet influencer, would be willing to post a notice about his product on Instagram? She was and did, and inquiries poured in, reminding me of the power of testimonial.

As librarians, we can encourage the same force when publicizing books (i.e., our product), although here we should enlist the help of surrogates.  The previous column discussed traditional booktalking in which librarians introduce a series of carefully curated books to spark interest in a wide variety of topics and genres.  These librarian-directed booktalks are powerful tools, but librarians should eschew sharing opinions to avoid any kind of literary harassment.

But, as peers to a student audience, kids can create booktalks that include testimonials and share them with others.  In fact, children’s booktalks are often peppered with gushes of enthusiasm or expanded praise for their favorite parts.

When we ask kids to create a booktalk, we have to remember that they aren’t born knowing how to format one.  Think of a fourth grader telling you, ad infinitum, about a favored book, and it’s pretty easy to remember that we have to work with them as they finalize their product.  Children’s booktalks will publicize a single title, but even then skills that involve persuasive arguments, identification of main idea, and utilizing supporting details, can be involved in creating booktalks. But don’t make these a detailed writing/speaking lesson. Often a first draft and quick run-through is sufficient for beginners. If we build self-reflection into the process, they will sharpen their skills for subsequent presentations.

For initial booktalks, encourage youngsters to have a beginning, middle, and end.  Impose a time limit to help create more succinct talks. Asking kids to record their booktalks on a timed application, such as ©Flipgrid, forces them to practice and conform to the video time constraints.  Such booktalks can be posted with the program’s QR Code and displayed around your building.  To reinforce the power of testimonial, always post the QR Codes with a picture of the booktalker holding the book. That way, passersby will be able to access the talks of their friends, both actual and wanna be ones.

So, does that mean we should encourage kids to accept whatever their peers think is a good book and immediately go out and read it? No.  Like any advertising – from dog food to political campaigns – the consumer must learn to evaluate it.  Elementary librarians in Birdville ISD, a public school district between Dallas and Fort Worth, Texas have, for example, developed a guide for students to use that asks them to reflect on what they’re choosing to read. That self-reflection (Plan, Do, Study, Act) allows them to be purposeful when selecting books. Librarians post the plan, but ask students (formally at the beginning of the year; on their own as the year progresses) to learn their own processes of selecting books and evaluating those selections.  If peer booktalks, or librarian recommendations, or suggestions from a list, don’t result in favored books, they can abandon these strategies and go with the ones most successful.

Since I work in a school setting, I can ask students to periodically fill in a sheet (or Google document) that describes their satisfaction with the last group of books they checked out and an evaluation of what processes worked best for them.  I like the idea of a written response because then I have a chance to write as well, reacting sometimes on their process and sometimes just to offer a couple of book suggestions.

Having youngsters consider even the slightest meta-analysis would have to be way more informal in a public library, but, occasionally just asking kids to think about how they choose the books they like can lay the groundwork for the self-reflection that will serve them so well in the future.

Use the power of testimonial. Have kids give ‘booktalks in their own classrooms, in other classrooms, over the morning announcements, or on a video loop on your public library site.  Post booktalk QR codes on displays, lockers, and walls.  The bigger the deal, the more polished, informative, and effective they will become. 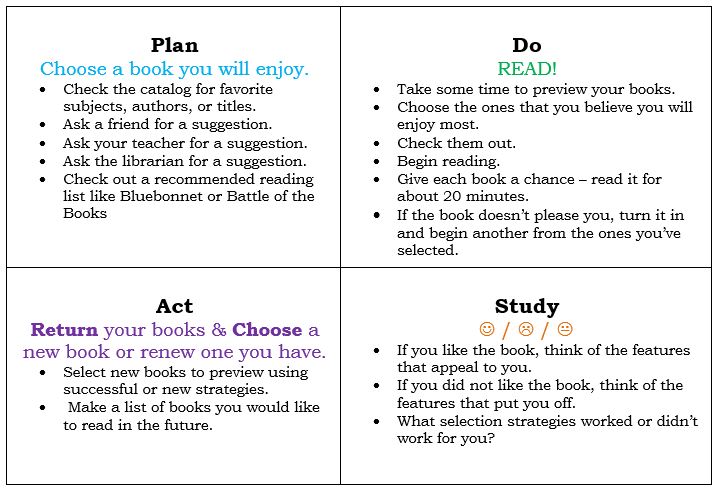