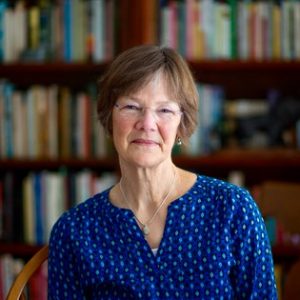 Getting to Know Joyce Sidman

Joyce Sidman is a poet celebrating nature.  She started out at a young age fascinated with verse and with the miracles of the natural world.  However she never saw herself as a scientist because she felt she had “neither the discipline nor the patience to be a scientist”.  So her poetry became the medium and science became her subject.  Then, when she had children of her own, she found her audience.  Children are “so willing to be curious and attentive and amazed.”  Her understanding of young people as an audience has been further augmented by several writer-in-residence programs she’s taken part in after her books started getting published.  “I love watching students take themselves seriously as writers and tell us what the world looks like from their point of view.”

Ironically, one of the biggest boosts along the way toward becoming a professional poet was learning German in college.  She had always just written in English instinctively from growing up with it.  However, “the study of German opened my eyes to the workings of grammar, and how different languages put together sentences in different ways.”  After realizing this in college she was ready to carefully craft her verses and to delicately calibrate the meaning of each phrase.  It was also easier to adapt the various forms and types of poetry so that they will better match the subject of the poem.  This means that as she writes about different creatures or facets of nature she is writing about them with very different types of poetry.  She has a form she calls “mask poems” and she wrote the book Butterfly Eyes with poetry in the form of riddles.

Sidman’s latest book, the Sibert-award winner The Girl Who Drew Butterflies, is the ultimate stylistic leap for her – she abandoned poetry for prose!  Her interest in the medieval naturalist Maria Merian was piqued by an exhibit at the Minneapolis Institute of Art in 2008 so the book was 10 years in the making.  It was a great deal of research but the writing was a bit less demanding.  As Joyce puts it, “it was a relief to work on nonfiction—to sit down and know what I needed to write, instead of conjuring up poems out of the thin air of imagination.”

Her next book will go back to poetry.  It is entitled Dear Treefrog and will publish in Spring 2021.  Her goal with this book is “to express something more – an emotion, an experience, a growing wisdom.  In Treefrog, I’m exploring loneliness, growing awareness, and the joy of finding a kindred spirit.”  Dear Treefrog will be illustrated by Diana Sudyka.  She has not illustrated a Sidman title previously but she is known as an up-and-coming artist for titles such as Circus Mirandus by Cassie Beasley, Secret Keepers by Trenton Lee Stewart and What Miss Mitchell Saw by Hayley Barrett.

Joyce Sidman’s well-written books have been blessed with excellent illustrators for her whole career.  Pamela Zagarenski won a Caldecott Honor for Sidman’s Red Sings From the Treetops in 2010 and Beckie Prange won a Caldecott Honor for Song of the Water Boatman in 2006.  Joyce credits her editor, Ann Rider, at Houghton Mifflin with finding illustrators to interpret her poetry.  “Ann has the ability to visualize how my text might be augmented with illustrations – how it might become a book.  She’s what I call the boss of the book.”  One exception to this was when Joyce and Beth Krommes set out together to try to create a book about spirals and created Swirl by Swirl.  But normally the text comes first.

Joyce Sidman feels like this is something of a golden age of children’s poetry.  The form is being used for such a wider variety of books than it used to be.  Her current favorite children’s poets include Kwame Alexander, Julie Fogliano, Juan Felipe Herrera, and Laura Purdie Salas.

Joyce has definitely got several younger age science poetry books in the works, but if a great subject like Maria Merian comes along she would not be averse to another straight nonfiction book.  Or, as she says, “I might do something completely different.  The future is wide open right now!”