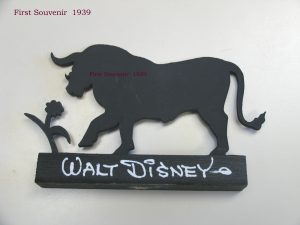 As part of the sales effort of the young New Method Book Bindery various people started attending meetings of librarians.  These might be the meetings of various state library associations and the largest meeting of them all, the national American Library Association each summer.  As was customary, the company experimented with various souvenirs to be given away to librarians who visited the New Method booth in the exhibit hall at these meetings.  They tried many conventional products with the New Method name on them, such as pens, rulers, letter openers, key chains, etc.  They also tried some giveaways that were more unique and unusual.  Many of these were wood products made by a carpenter in Jacksonville whose shop was near the bindery.

Finally, one of their experiments went over really well, was reproduced for many years and became a hallmark of the company.  This was a black wooden silhouette of the bull Ferdinand, a main character in a very popular children’s book.  The Story of Ferdinand was a picture book by the well-known author Munro Leaf, illustrated by Robert Lawson, published in 1936.  Lawson at this time was almost unknown but in 1941 he won the Caldecott Medal for They Were Strong and Good and in 1945 he won the Newbery Award for Rabbit Hill.  The souvenir was produced in the summer of 1938 in Jacksonville by the craftsman Grahame Aldrich.

The souvenir was first handed out at the American Library Association meeting in June 1938 in Kansas City, Missouri.  They gave out about 3000 of the souvenirs at the meeting.  The souvenir must have been wildly popular because, according to ALA’s figures, attendance at the 1938 meeting was only 1900 librarians.  In fact there was one very famous recipient.  The company’s founder, his son and the company’s first sales manager – L.D. Sibert, Robert F. Sibert, and Ernest Rempe – were manning the booth at the ALA exhibit hall.  They went out to dinner with a couple of customers at the Muehlbach Hotel restaurant Tuesday night, June 14, 1938.  They suddenly noticed that Shirley Temple, the child actress, and her parents were eating at a table not far away.  L.D. Sibert and one of the customers got up and went over to present Miss Temple with a Ferdinand souvenir.  They reported that she seemed very pleased with the gift.

The book was so popular that Walt Disney decided to do an animated short of it in his studio and that film was released in 1938.  The same sales crew was going out to San Francisco in June 1939 for the ALA meeting so they stopped off in Los Angeles and went into the Disney Studio on Hyperion Avenue in Los Angeles to meet Walt Disney.  He even graciously signed copies of the Ferdinand souvenir, personalized to L.D. Sibert, Robert F. Sibert and E.F. Rempe.

The souvenir tradition continued down through the years although, for financial reasons, it very quickly became a plastic card with a plastic holder, rather than wood.  It was often an illustration from the Caldecott-winning book of that year.  In addition to being given away at meetings, the company sales force also carried these souvenirs to give them away on their sales calls in schools and public libraries.  By 2015, the bulk of the company souvenirs had become a magnetic card with a children’s book illustration on it, although a few plastic cards and holders are still produced for those librarians who have collections of the old souvenirs and want to continue the tradition.