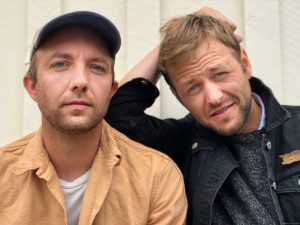 All About Mac Barnett, as Told by Jon Klassen

Jon feels that the keys to Mac’s success with children’s books is his deep knowledge and study of picture books in the past and in the present, and his empathic understanding of what makes young readers tick.  This knowledge about young readers was hard-won information gained by working as a camp counselor as a young man.  Jon observes “Every now and then I’ll think ‘This isn’t going to work, kids won’t get it’ and he’ll say ‘They’ll get it’ and they always do.”  Jon believes one of the big influences on Mac when he was young was reading the outrageously funny picture books of Jon Scieszka.  Mac has been able to capture the feeling young readers get from Scieszka’s books, and from other great authors like Mo Willems and Dav Pilkey, that they are having just as much fun writing what they write as the young readers are having reading what they write.  Mac has also gone back into the distant past of picture books to understand what made the books of Margaret Wise Brown, Wanda Gag, and Ruth Krauss work so well so he could apply those lessons to his own work.

As the illustrator, Jon has resigned himself to the role of quiet straight man at their book signings and appearances, while Mac, as the author, is the front man.  In fact, “If I wasn’t the handsomer one I don’t think anyone would even want me to sign their books at all.”  Also, as the illustrator, Jon finds that Mac always gets his part of the book turned in first while he struggles with his deadlines for the drawings.  As he puts it, “Mac always has his work done and handed in with time to walk his dog before dinner.”

You would expect Jon Klassen, as an illustrator, to believe that the illustrations are the most important part of picture books.  However, he is quick to say how important the writing is.  “What Mac and I both like is when the words and the pictures have separate and important jobs in telling the story….If we were going to measure very carefully we would probably find that the pictures were a few small percentage points more important, but only a few.”

At the moment, there is not another collaboration between Barnett and Klassen in the works.  But, in between conversations about Frog and Toad, they have some things percolating and surely it won’t be long before another picture book appears!

All About Jon Klassen, as Told by Mac Barnett

Mac and Jon agree that the other fellow has a very well-developed knowledge of picture books both past and present.  Mac remembers stories Jon told him about his mother hauling him on a sled through Canadian snowdrifts to get to the public library and the wonderful collection of old picture books that he would peruse on his grandparents’ bookshelves.  Apparently the two of them discuss children’s books beyond just Frog and Toad when they get together!

Mac believes Jon is a very unusual mix of two disparate tendencies and that’s what makes his children’s books so unique.  “Jon is – and I bet always has been – a serious moral thinker and a deeply funny person.”  Thus his books tend to deliver a very serious message but they are wrapped up in a very humorous package.  The other unusual aspects of Jon’s character are that he wears a baseball cap virtually 365 days a year and, as Mac reports, “Jon doesn’t really do impressions, but he has a killer Clint Eastwood.”

Jon is perhaps also a unique character in Mac’s eyes because of the varied individuals Jon has drawn inspiration from, at least as Mac sees it.  These include the filmmakers Alfred Hitchcock and Stanley Kubrick, the great Canadian artist David Milne, the great American novelist Cormac McCarthy, and the English picture book illustrator Pat Hutchins.  The artists are perhaps not so surprising but the moviemakers and the novelist probably reflects Mac’s views on what goes on in a good picture book.  It is certainly not just the pictures!  “In a good picture book, the words and the pictures should be so tangled up that distinguishing between them is folly.”

It appears that the only cause for disagreement within the finely oiled team of Barnett and Klassen is that they don’t agree about who is the more popular one at their joint book signings.  Mac believes it is Jon but Jon claims it is Mac because he does most of the talking!  However, they both agree that Mac always gets his work turned in on their books first.

Unfortunately, Jon and Mac don’t have another book together in the works presently.  But Mac Barnett is currently working on a book with Carson Ellis.  No doubt, given Ellis’s whimsical and weird pictures in her Du Iz Tak? and Home, her collaboration with Mac will produce something notable.