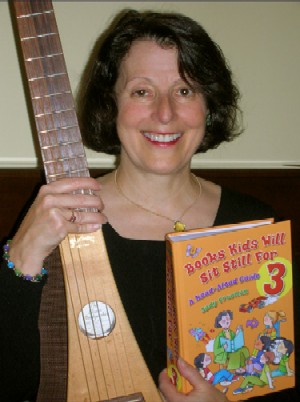 JUDY FREEMAN is a well-known speaker and writer on reading aloud, storytelling, booktalking, and all aspects of children’s literature. A national seminar presenter for BER (Bureau of Education and Research; www.ber.org), she also gives a variety of workshops and speeches at conferences, schools and libraries throughout the world for teachers, librarians, parents, and children. Judy served as a member of the Newbery Committee to select the Newbery Award book for the year 2000 (Bud, Not Buddy by Christopher Paul Curtis) and the 2008 Sibert Committee, to select the most distinguished informational book for children published in 2007 (The Wall: Growing Up Behind the Iron Curtain by Peter Sís). Judy proudly served as a member of the 2014 Caldecott Committee to select the Caldecott Award book for the year 2013 (Locomotive by Brian Floca).

Judy has written more than 400 book reviews and other content for best-selling author James Patterson’s spectacular website for parents, librarians, and teachers, and other children’s book-loving souls. Learn more about Judy Freeman and her work at her website,  www.judyreadsbooks.com.

The Winners! Handbook is put out once a year by Judy Freeman and contains a closer look at some of her top-rated children’s books from the previous year. Each year, Freeman combs through the books named “best of the year” by various library organizations in order to highlight the best of the best, or bring attention to books that had been overlooked by awards committees. Freeman uses this handbook in her acclaimed Winners! Workshop, where she examines various books’ library and classroom applications as well as how the titles tie in to Common Core Standards.

Every spring, for the past 35 years, Judy Freeman has presented her wildly popular, idea-packed, full-day program, The Winners! Workshop, throughout New Jersey, a culmination of the scores of seminars she has given across the U.S. that past year. Her program is a field day for teachers, librarians, and other children’s literature-lovers looking for innovative and practical ways to use the best of the year’s children’s books for curricular connections, thematic tie-ins, resource-based learning, and just plain fun. If you can’t make it to New Jersey each year, this handbook, upon which Judy’s workshop is based, and that each participant receives as part of the day, is the next best thing to being there.

In The Winners! Handbook, you’ll discover a host of successful, kid-tested, motivating, literature-based techniques and strategies for reading and writing lessons across the curriculum, giving you a whole new repertoire of irresistible titles your kids will love as read-alones, read alouds, and for book discussion groups.

From The 2019 Winners! Handbook: A Closer Look at Judy Freeman’s Top-Rated Children’s Books of 2018 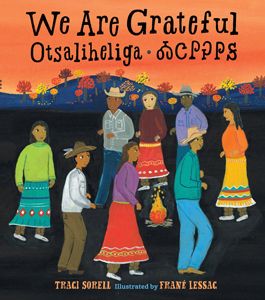 “Cherokee people say otsaliheliga to express gratitude. It is a reminder to celebrate our blessings and reflect on struggles—daily, throughout the year, and across the seasons.” So begins an affirming and thoughtful picture book that depicts a Cherokee family—a mom, dad, baby, son, and daughter—and extended community appreciating each season, beginning with uligohvsdi (pronounced oo-lee-GO-huhs-dee) or fall. The first thing you need to do is write the Cherokee word, otsaliheliga, on the board (regular, Smart or chart) and its pronunciation, which is quite the tongue-twister. It’s “oh-jah-LEE-hay-lee-gah.” Once they (and you) have that mastered, you’ll have your listeners join in to repeat the “we say otsaliheliga” refrain at the start of each new season covered in the story. The first of thirteen double-page spreads of full-bleed, brightly-colored gouache paintings in a naïf folk-art style shows the family walking together through a park with trees in full fall hues. “When cool breezes blow and leaves fall, we say otsaliheliga.” At the bottom of the page is the word for fall in four different ways: in Cherokee but using English letters, phonetically, in the Cherokee syllabary, and in English translation. The family attends the Great New Moon Ceremony to welcome the Cherokee New Year. They collect buckbrush and honeysuckle to weave baskets, and they “remember our ancestors who suffered hardship and loss on the Trail of Tears.” In winter, gola (GO-lah), they throw snowballs, build a snowman, and sled, just like all kids do in snowy places. Elders share stories around the table while the family eats “buttery bean bread and steamy hominy soup.” (Note that the dad is wearing the apron. Go, Dad!) The children make corn-husk dolls and play cane flutes. In spring, the children “practice patience” to sew pucker-toe moccasins, make coiled clay pots, and plant ani (AH-nee) or strawberries, “an ancestral story’s sweet-smelling reminder not to argue with one another.” Some of the customs shown are familiar, others are not, which is what makes the book so engrossing. We all have our own customs, foods, crafts, games, ceremonies, and family traditions. There are few books for children that show everyday family life of Native American families. This one is essential; rich with detail, it radiates the unspoken message that we are all more alike than different.

GERM: When reading the book aloud, it will take a bit of practice to pronounce correctly the nine Cherokee words integrated into the text and have your kids repeat them with you. At the back is a glossary of unfamiliar terms. Children can compare and contrast their lives with those of the Cherokee family. What traditions or customs does your family have that you love the most? The mention of the Cherokee story about strawberries? Here’s an excellent picture book to share: Joseph Bruchac’s The First Strawberries: A Cherokee Story. The final page is a chart showing the Cherokee syllabary, the written version of the Cherokee language, invented by Sequoyah in the early 1800s. Is there a children’s book about his accomplishment? Why, yes, there are two, both fictionalized: Joseph Bruchac’s Talking Leaves and Peter and Connie Roop’s Ahyoka and the Talking Leaves. The Cherokee Nation in Oklahoma has an extensive website to explore: visitcherokeenation.com  Students will enjoy looking up common English words and hearing them spoken in Cherokee here: cherokee.org/About-The-Nation/Cherokee-Language/Dikaneisdi-Word-List. There are about 7,000 words in the lexicon. Type in the word, then click on the play arrow to hear it spoken. Interestingly, some of the words highlighted in We Are Grateful, including the word for “grateful,” are different from the phonetic pronunciation on the website. You may want to give older kids a brief description of the Trail of Tears, mentioned in the book, though it’s not an easy thing to explain. The website, visitcherokeenation.com/history/Pages/ a-proud-heritage.aspx, puts it soberly and succinctly: “In 1829, gold was discovered in Georgia. The settlers began to covet the Cherokee homelands, and despite a U.S. Supreme Court ruling in favor of Cherokee authority, the Indian Removal Act passed in Congress by one vote, over the objection of Daniel Boone and others, and was signed into law by Andrew Jackson. In 1838, more than 15,000 Cherokee men, women and children were rounded up and marched over a thousand miles to Indian Territory on a pathway that became known as Di-ge-tsi-lv-sv-I, The Trail Where They Cried. About one quarter of the Cherokee people died in internment camps, on the trail and after arrival into Indian Territory, what is now the state of Oklahoma.” Horrifying. In sync with the life-affirming massage emanating from the book, have your kids think about what they are grateful for and fill out the “I Am Grateful When . . .” worksheet in this handbook on page 205.

To order the “Winners! Handbook” click on the link within with the photo, to order the BOOKS mentioned inside the handbook, use the green “Click Here” button provided.