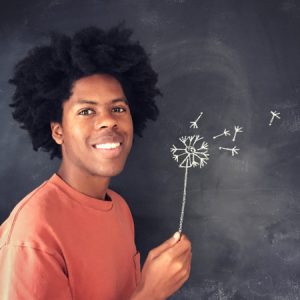 Getting to Know Christian Robinson

Christian Robinson has been very busy since he illustrated his first book – Harlem’s Little Blackbird: The Story of Florence Mills, by Renée Watson (2012). To date, in mid-2020, he has published fifteen more books, several of which were on the New York Times Best Illustrated list. He won Caldecott Honor and Coretta Scott King Illustration Honor Awards for the Newbery book Last Stop on Market Street (by Matt de la Peña), as well as a Coretta Scott King Illustration Honor for The Dazzling Life of Josephine Baker (by Patricia Hruby Powell), which also received a Sibert Informational Book Honor.

As it happens, an email from an agent set his productive picture book career in motion. “Long story short, I graduated from animation school and was doing a lot of odd jobs to pay the bills. I kept a blog where I shared personal art projects. One day, I received an email from a children’s book agent asking if I had any interest in making books for kids. My answer was an enthusiastic yes, and I’ve been doing that since. It has been the most fulfilling, life-changing adventure and I am so grateful to Steven Malk for sending that email.”

Robinson’s animation background, including work at Pixar and The Sesame Street Workshop, was good preparation for bringing characters to life in picture books. For additional inspiration, he looks to graphic design and the art and illustrations of the 1950s to 1970s. Are You My Mother? by P.D. Eastman was an early favorite, and he admires books by Roger Duvoisin, Ezra Jack Keats, and Leo Lionni. “I love the illustrated advertisements you’ll see in old Life magazines and the colors of images in old National Geographics. I think what appeals to me about that period is the simplicity and timelessness. I’m influenced by the art of the past, but also do my best to create something that reflects the time we’re in now.”

Finding his own voice has always been part of the process. Recalling his childhood, he says, “[C]reativity was my way of escaping and processing the world around me, and gave me some say in what the world could look like, at least on a piece of paper.” What advice would he offer to his younger artist self? “I would share a quote from Miles Davis, ‘Sometimes you have to play a long time to be able to play like yourself.’ Basically, I would want myself to know that what you’re doing right now is helping you develop as an artist, which is being inspired and influenced by artists who you admire. Know that there is a voice in you that is uniquely your own, and that you should not be afraid to explore that.”

Each illustration project is an opportunity for exploration. “As I familiarize myself with the text, I make storyboards on very tiny post-it notes. I do this because I don’t want to get too attached to one idea. If I make a mistake (and I make many), I can just toss the post-it aside and try again. The final art is very improvised. I always have an idea of what I might do, but I want to leave space to kind of use whatever material feels right for that illustration, which keeps the work exciting for me and hopefully, interesting for the viewer.” He especially enjoys creating the book cover, endpapers, title page, and book case, because the lack of text for those parts gives him free rein to “help shape the world in which the story takes place, and give insights to the reader before they even dive in.”

Robinson usually chooses cut paper and paint for his collage illustrations. “With cut paper, I have a lot of control over how a shape or picture appears, since I use an X-Acto blade, which is very clean and precise. Paint, however, is a little more unpredictable in terms of mixing colors, how it dries, and the energy of the brush strokes. I like that balance of control and chaos.”

Readers often wonder whether artists and authors collaborate during the process of book-making. For their recent title, Just in Case You Want to Fly (their second book together), Robinson and writer Julie Fogliano did most of the work separately. His whimsical illustrations, featuring a variety of children, playfully expand on what it means to fly. “I learned after illustrating the entire book that for her, the idea came from her daughter helping her pack for a trip. She was enthusiastically putting too many things in the suitcase, ‘just in case’ her mom needed them for her trip. Had I known this, the book may have turned out differently. What I love about Julie’s work is that she leaves a lot of space for the reader and illustrator to explore, use their imaginations, and have fun.”

Robinson’s list of publications continues to grow quickly. The forthcoming Milo Imagines the World, by Matt de la Peña, tells a story that’s “deeply personal” for him, about a young artist whose parent is incarcerated. In You Matter, which was released in June, 2020, he illustrated his own text for the first time. ”I hope to continue telling my own stories. In the past, I’ve felt more comfortable as a visual storyteller than a writer. However, I feel like with each collaboration I have with authors of books for children, I’m discovering my own voice as a storyteller and beginning to trust that more.”